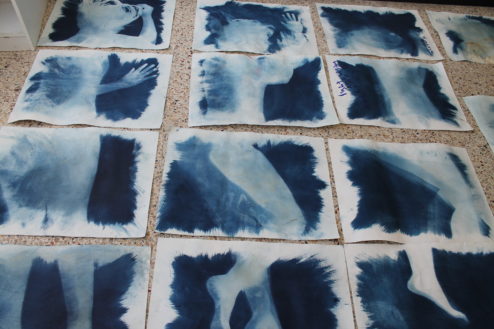 Nude Descending a Sidewalk is a series of cyanotype portraits made on a public street in Melbourne, Australia to provide a visual reference to climate change while also discussing the ephemeral value of women and queer artists in public (living) and private (collected) spaces. It is an homage to Baroness Elsa von Freytag-Loringhoven, an often over-looked living artist, poet, and visual artist who has recently been identified as the originator behind the Duchamp urinal and potentially other works but who received little credit during her lifetime and passed in poverty. This performance took place in March 2017 as part of an exhibition with Casey Jenkins at Trocadero Gallery.

The Gaping Hole Above Melbourne: This performance and the resulting works above were produced for the exhibition Hidden Agenda a showcase of international queer artists curated by Casey Jenkins and held at the Trocadero Gallery in Melbourne, Australia. It is common knowledge among those who are from Melbourne that above their city the ozone layer has been depleted to the point of offering little filter but instead is a kind of dangerous, gaping hole. The choice of cyanotypes as a medium for this project reflects an interest in investigating the tactile validity of these claims and the potential hazardous effects of the sun’s unfiltered rays on the people who live below. My findings showed that a cyanotype which would typically take 20 minutes to develop in clear sunlight developed in as quickly as 5 minutes. This is worrisome. 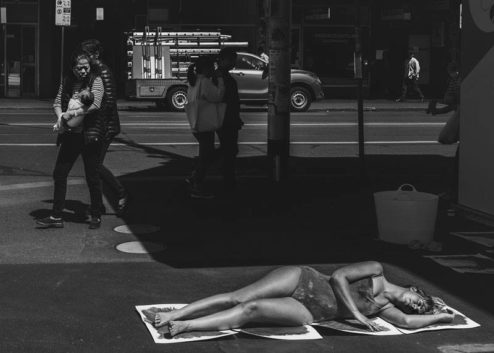 An Homage to Elsa: The title and aesthetics of Nude Descending a Sidewalk are an homage to the Baroness Elsa von Freytag-Loringhoven, the queer cacophonous secret agent behind perhaps many of Duchamp’s works but certainly the most renown: the R. Mutt urinal Fountain. While Fountain is undoubtedly one of the most recognizable and enduringly controversial works of art in the world, it is not as easily recognizable as an instance of intellectual (if not physical) theft, in this case by a mentor taking advantage of a love-struck student he was probably also sleeping around with.

In response, Nude Descending a Sidewalk steals imagery from another one of Duchamp’s most controversially unaesthetic works Nude Descending a Staircase No. 2 and returns it to the aesthetics of his brilliant student and rumored paramour (he adamantly denied this) von Freytag-Lovinghoven. This performance was offered on the Baroness’s birthday in honor of her flamboyant style, frequent re-purposing of public space and objects, and unabashedly bodily and bawdy works. The Baroness led a long, hard life struggling to support herself as an artist especially as she advanced in years. Duchamp did not offer much by way of support and even at several points denounced any affiliation with her especially as her mental state fluctuated with age. Nude Descending a Sidewalk is a reminder of the decay of the human mind and body, the differing values society places on its citizens’ minds and bodies according to their status (as women / men, as queer / straight, as not white / white, as poor / wealthy, as negligible / influential). It is also a meditation on the impression we leave on our cities and the physical spaces in which we dwell: how our movements breathe life into infrastructure, and when both city and citizens are gone how our ghosts continue to infuse the ruins with our praxis.

Exposure: Positioned across from Trocadero Gallery, I placed on the searing hot sidewalk several sheets of pre-sensitized cyanotype paper in a grid the length of a body. Once in position, I placed my own body down on the sheets, lying still while the sensitizer on the sheets around my body was exposed in the sun over the course of several minutes. When finished, a ghostly photogram of the outline of my body remained upon the sheet. This first set of images completed, a fresh set of sheets were positioned on the sidewalk alongside the previous set and I lay in a slightly different position, knee bent, as if in the process of walking. I repeated this several times so that when the series of images were completed, the overall impression would be that of a woman “walking down” a sidewalk in a horizontal fashion. 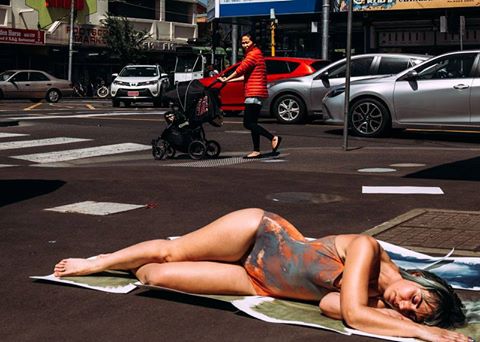 Despite the piece’s title, I was not nude (public nudity is prohibited in Melbourne) but wearing a nude bathing suit. which had also been previously coated in cyanotype sensitizer so that it, too, developed from beige to bright orange and blue during the performance. This would later be worn by Casey Jenkins during a feminist ice fight towards the exhibition’s closing.

Reactions: Trocadero Gallery is located in Footscray, a multicultural neighborhood and hub for East African and Vietnamese immigrants. The streets outside the gallery where the performance took place hosts a bustling crowd of commuters, workers, people en route to bars and sporting events, shoppers, loafers, transients, and those who call Footscray home.

The performance received a variety of responses ranging from those who passed swiftly by to those who stopped to watch respectfully for quite some time. Many women walking by with their children (often at the request of their children) would stop, point and explain that I was making art and then go into an explanation of what art is (one of the greatest perks of being a performance artist is getting to overhear parents explain what “art” is to their kids). One woman told me my work was beautiful. Another told me I was brave. A large number of those who passed by were excited by the prospect of public art making in Footscray and stopped to take photos of the process and chat with my collaborators.

There were, of course, less respectful responses. One man stopped and stared at me from the ass-end up for a long time without saying anything. When he got out his phone to take a video, a collaborator asked him to leave. Another man asked me for my number and told me I was too pretty to be on the sidewalk. A group of men stood around at one point and stared down at me before losing interest and moving on. One person thought I was homeless or mad or both and even went so far as to suggest to my photographer that Melbourne really should do more for its transients.

But there were other conversations too, interactions which left me thinking about public space and public art as a catalyst for renewing cultural identity, how we cannot help but leave impressions of ourselves upon our cities, the ongoing dance between city and citizen, a push and pull which keeps both always moving, always changing.

Throughout the performance which lasted several hours, the issue of gentrification was not far from my mind. My current neighborhood of Boyle Heights in Los Angeles was at the time undergoing drastic changes including displacements which many locals blame on white-owned businesses like art galleries and coffee shops. I had been told prior to my arrival that Footscray might be experiencing a similar state of precarity. To avoid imposing on the day to day life of locals as much as possible (acting as a dismissible guest, something I feel is central to respectfully entering a community which is not one’s own), I selected performance locations which allowed passersby to easily move around me while at the same time remaining open to discussing whatever subjects observers wished to broach.

Most who inquired about the performance were curious, courteous, and welcoming. “We need more art in this neighborhood,” an older Vietnamese man who had lived in Footscray for many years told me. Many were unaware of the existence of the Trocadero Gallery across the way, and the performance presented a nice opportunity to connect locals to the gallery. The people working at the hair and nail salon across from where I was performing emerged at several points to watch. At one point a woman stood over me, staring down with intense focus which I misread as annoyance. “Are we bothering you at all?” I asked, and then suggested we would be happy to move if we were making any trouble for her or her business. “No! No!” She said. “I think what you doing here, this is beautiful. And also really strange.”

My My Hair Beauty Salon