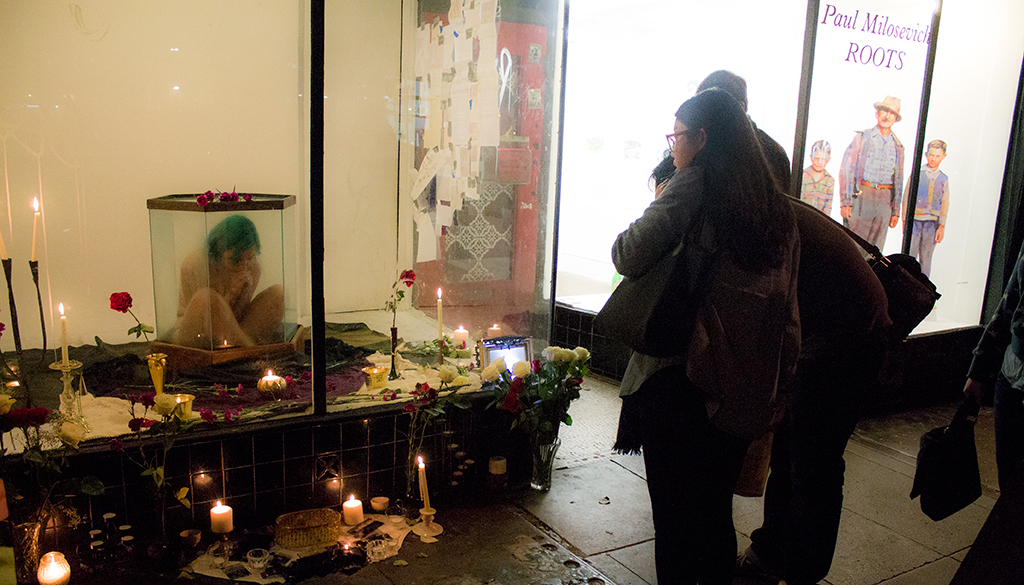 If you had asked me what I did over the weekend and I explained I had spent 12 hours contorted inside a glass display case the size of a tree stump in the ATA gallery window on Valencia Street in San Francisco, you’d probably say I was crazy. After all, this is not generally speaking how a Bay-native spends her once-in-a-blue-moon trip back home. But there were reasons behind my madness. My nearly nude, entirely public isolation was part of a performance piece entitled “Comfort & Civilization,” an attempt to communicate with my hometown community about the shifting residential and commercial landscape of the Bay Area and the position and treatment of women within that transitioning society. 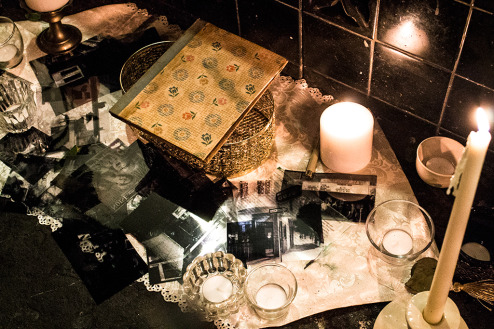 On the street facing the window, a vigil of candles, roses, and photo negatives was arranged in honor of businesses, many of which catered to queer populations and artists, that had closed in recent years due to swift changes in property values and costs of living. I invited visitors to write in a journal positioned at the center of the vigil, providing a space where they could leave their memories of these vanished spaces and their thoughts on the transitioning residential and commercial landscape of the Bay Area.

Over the course of the performance, I would estimate that nearly 1,000 people came and went. I sat in the only position I could manage in the tiny space, hugging my knees to my chest hour after hour, and watched. 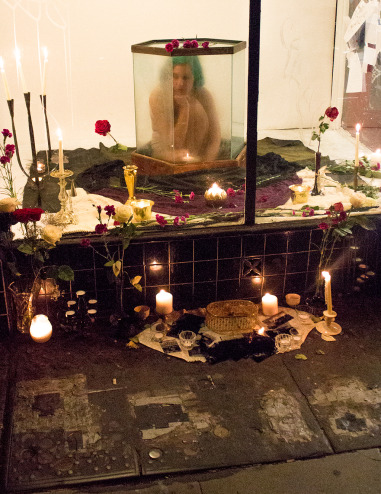 As with all street performances, some members of the public wanted nothing to do with it. They either ignored me or (yes, honestly) ran away from it (some of them actually screaming!) I’d say this accounted for maybe one third of the people who came by. 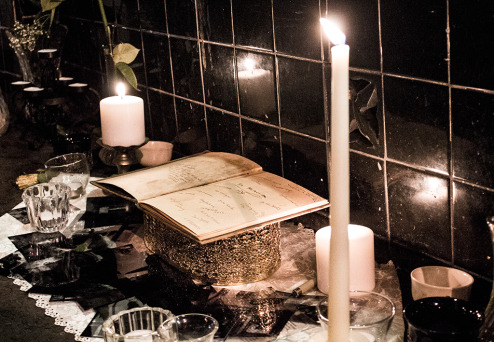 More than a few people stopped to taunt me or write nasty things in the book about how change is inevitable or how my performance was just a plea for attention. A few tried to get me to leave my enclosure and go out on dates with them (this was communicated via crude drinky drinky gestures). More than a few thought my male friend Bella (who was keeping watch at a distance) was my manager, or was the “real artist” behind the piece, implying that I was some kind of prop in a work orchestrated by a man. Many thought I was dead or a mannequin and were horrified when they discovered I was a real, living, breathing (sort of) lady. 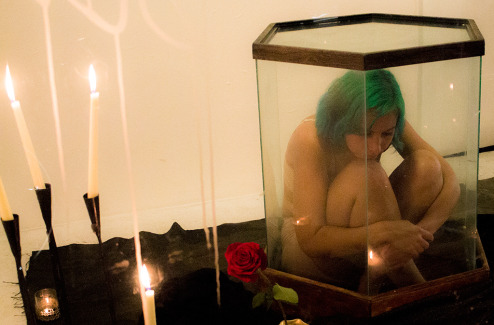 The reactions that affected me the most were from the people who made snide comments about my body or tried to harass me through the glass. Like the man at the eleventh hour who, when I was tired, hungry, sore, and feeling pretty drained from making myself vulnerable to 1,000 strangers, angrily beat his fists against the glass screaming, “BE HAPPY! SMILE!” on repeat until he got tired of me staring back at him wordlessly. Or the guy who in a buddy buddy way commented to Bella that I would look good in the back seat of his car… 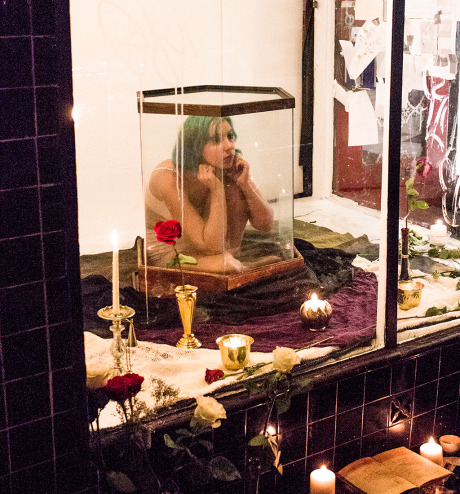 But there were positive interactions too, beautiful ones that make me forever grateful I did this crazy thing. Most passersby wanted to help me, or were concerned about my safety and well being. One woman even ran into the gallery and asked if there was anything she could do for me. “Whatever she needs, I’ll go and get it!” She came back to the window, her hand over her chest saying that I had broken her heart. She was not the only person to tell me this. 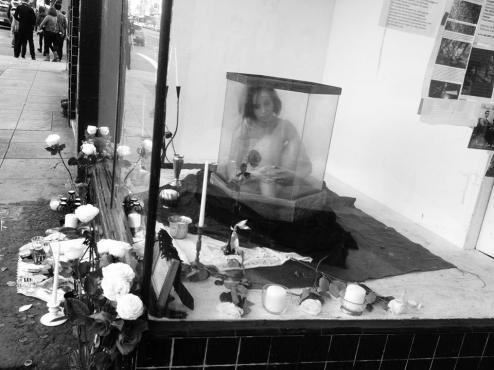 The piece resonated with more than a few on the subject of the vulnerability of women in public space, and how this conversation cannot be removed from discussions of our shifting economy. I remember a man who saw me and nearly cried. I wanted to talk to him, but couldn’t speak through the glass, so I gestured that he could write in the book. I have no way of knowing for sure that he was the person who wrote this, but when I later opened the book, there was a long passage that began, “I bought mace for the first time for my girlfriend last week.” It went on to explain that his girlfriend had experienced close encounters of a violent nature multiple times in the past month. It concluded by saying, “Your use of nude and simplistic clothing makes these memories come up shrewd and clear- my fears for her, and the explanations imagined about where we choose to call home. Thank you.” 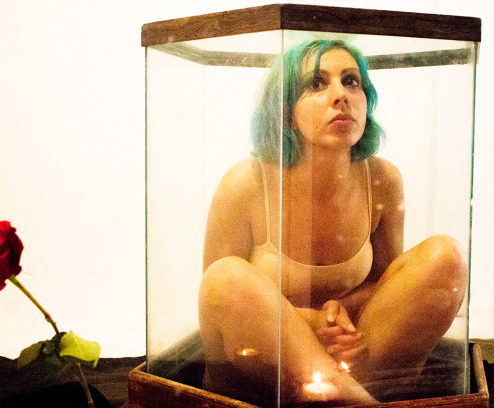 One group surprised me: the parents. When I began the piece, I was worried the parents would resent me for putting their children in the path of confusing and disheartening imagery that they would then bear the burden of explaining. I was wrong. Some of the most involved conversations occurred between children and their parents who embraced it as an opportunity to talk about the role of small business, women’s bodies in public / private space, art and why art is important to society. It is comforting knowing that such individuals are having children and encouraging them to think. 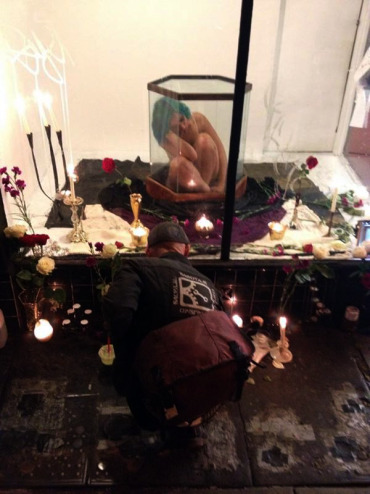 There was a lot of my own performance that I didn’t get to experience. I would sometimes look up and through the frost created by breathing my own recycled air for hours on end see crowds of people communicating with one another on the sidewalk. Through two panes of glass, I could not usually make out what they were saying. A friend of mine later told me about one experience he had. He was lighting a candle for the vigil when someone said to him, “I’m sorry for your loss.” And before he had a chance to respond another person, also a stranger, cut in and said, “HIS loss? It’s YOUR loss too. It’s ALL OUR loss.” 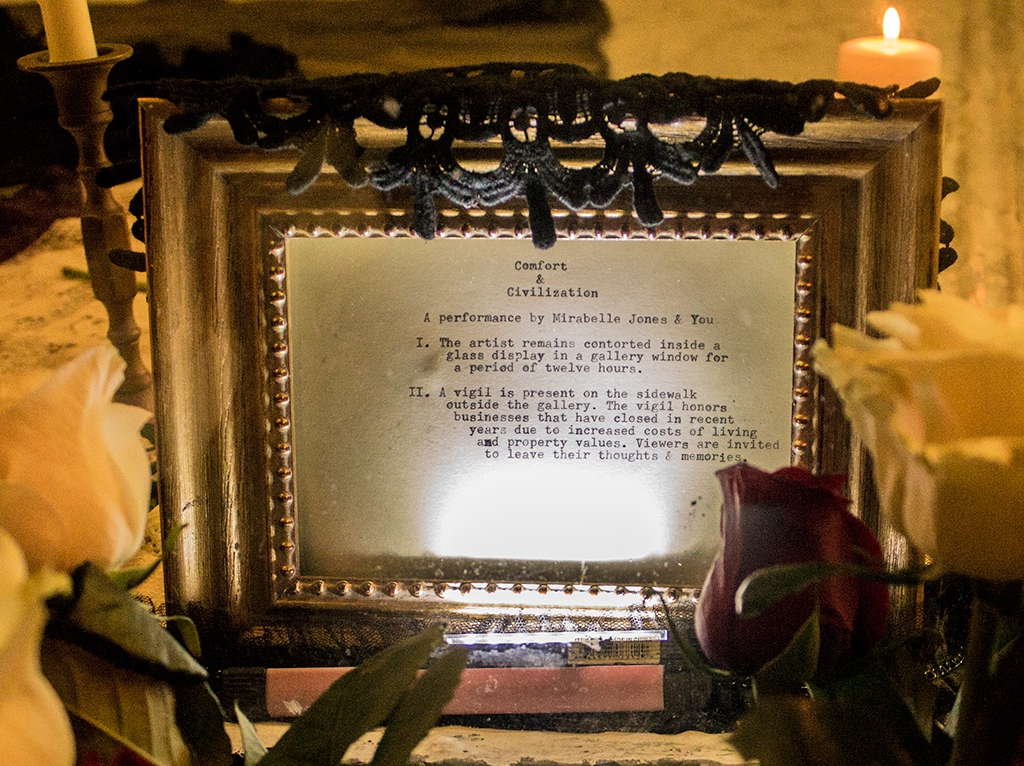 I wasn’t sure if I would make it to the end. With only hours left to go, my knees and elbows were badly bruised and the sitting was almost unbearable. I was exhausted from the constant exposure, the lack of food, the discomfort of wondering whether or not I would make it, the uncertainty of whether or not what I was doing was, in fact, worth anything to anyone. With the help and encouragement of a few friends who were keeping watch and the return visitors who were rooting for me “to escape,” I finally managed to make it to the end of the 12th hour. 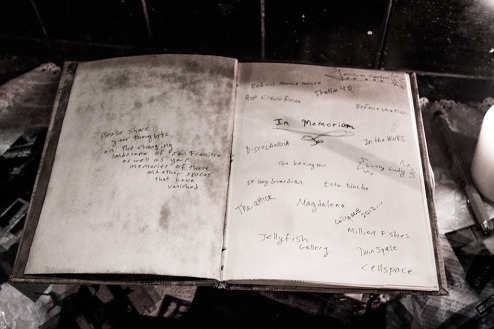 On the way home I felt ill at ease. There were a few things bothering me. First, there was the woman at the performance who had shouted, “This is bullshit! None of these businesses are Mexican!” before storming off. Then there was the street person who went by grumbling something about the privilege of artists. These things bothered me because they were hit a chord of truth. And I took a moment to acknowledge that.

I acknowledged that for me this was just a performance, just 12 hours of discomfort, of having that discomfort visible, but for some their discomfort due to homelessness as well as their permanent public exposure is a constant, that driving to a warm house and a comfortable bed is not an option for many, many people in the Bay Area. 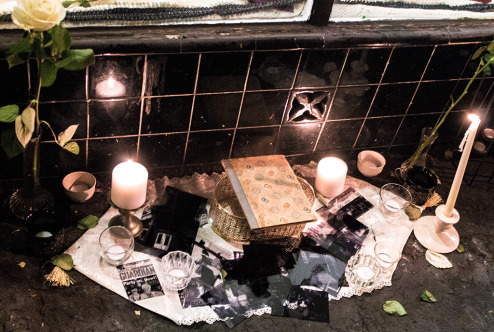 The next day, I woke up sore and still exhausted despite having slept for half the day. My legs and thighs ached like they had been pelted with stones. I looked at myself in the mirror and thought, “What did I do yesterday? Why did I do that? Am I crazy?” It’s a thought many who witnessed the performance probably had, and a few vocalized, a thought that has troubled me many times since. Seated in a Starbucks in the North Bay because the local cafe had closed last year, I opened the journal from the vigil and read it for the first time. I read the lamentations of first, second, third generation San Franciscans who knew they would never be able to afford to have their children in the city that they loved, the city of their birth.

“I am now 18. I want to raise my children in the beautiful city I grew up with but I’m afraid that I will not be able to afford it.”

“Beginning at age 4, I started telling people that I was born in San Francisco. My parents would try to correct me, but I insisted. Now that I’m grown, I’m living my dream- and I feel as if I really have been born again into the magical place that I love. But with this rebirth comes the knowledge that it will be nearly impossible for me to potentially raise my own children here. So maybe I will just lie… and tell them they were born here.” 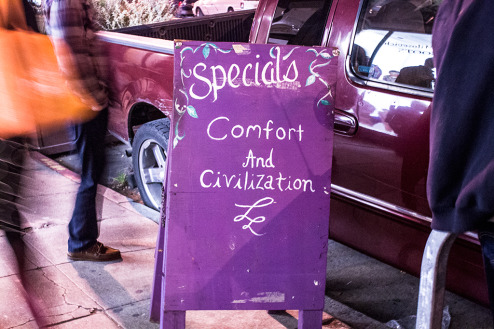 I read the memories of the spaces that had closed or were in the process of closing.

“The Uptown in Oakland was home to many events and memories. For me, it was the site of my stint in burlesque. I learned to love and celebrate my body along with others who overcome fears and social boundaries. RIP”

“Thank you Sylvie Le Mer for all you used to give to our hood before you lost your space. Goodbye Quetal- Cafe Venice (may Fred rest in peace), the Albion, oh so many more. I have such happy memories.” 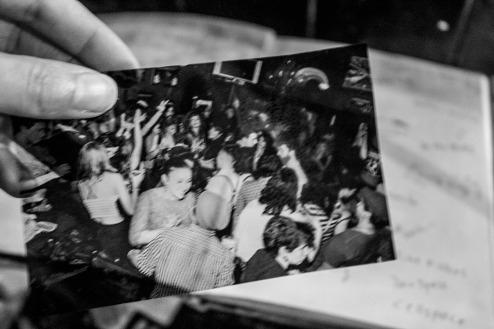 I read the comments of the people who thought I had wasted my time.

“Now is not the time to kid yourself.”

“You are not gonna make it…” 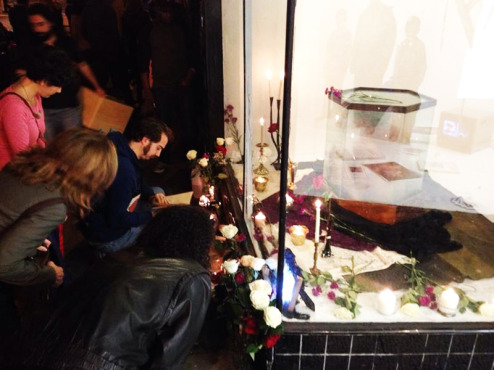 And the people who were grateful.

“You are so brave. Old SF is still here. The artists aren’t going anywhere.”

“To be silent in this time of crisis is shameful. We must speak of and work through this pain.” 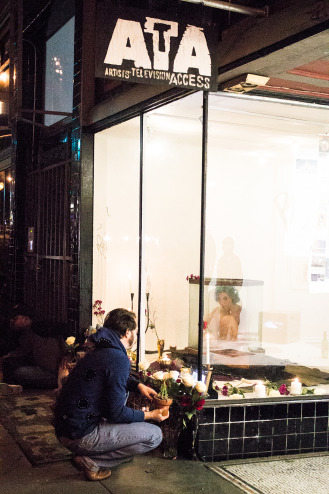 And the people who wanted to help.

“I don’t want to change this city. I don’t want to participate in a capitalist game that pushes people out of their homes. I ride the silver bus. I gave notice yesterday. I hope I can help repair some of the damage my presence here has caused. Thank you for this.” 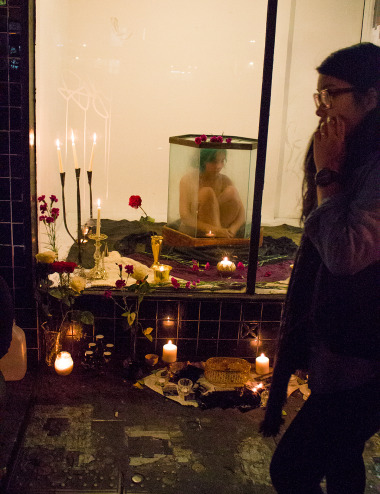 I read and I cried. In a Starbucks. No one asked if I was alright but if they had, I would have told them that in a society that is so totally unacceptably unjust to so many of its citizens, that ignores their words, their suffering, denies their narratives as legitimate, that demands they quit whining and pull themselves up by their boot straps even when they cannot afford boots, I am so grateful I get to use my voice on their behalf.

If I learned one thing from making myself vulnerable to so many people it is this: It is only by acknowledging our vulnerabilities, by refusing to see our experiences of suffering as unique and negligible, that we become empowered to build a society based on empathy and respect. On that day I made myself vulnerable to San Francisco, but San Francisco also made itself vulnerable to me. And what I saw was a people freed from glass cases, ready to speak up for the city they loved.