For this performance I worked in conversation with a 630 sq. ft. rainbow pride flag I constructed for the Los Angeles vigil honoring the victims of the Pulse Nightclub shooting in Orlando, FL. The performance took place on June 24th, 2016 as part of the Rainbow Shift 2.0 opening show curated by Tiger Munson (Tigrefino Projects) and Baha H. Danesh (We Choose Art) held at the historic Montalban Theatre in Hollywood.

The pride flag was created the day of the Los Angeles vigil which took place on June 13th, 2016 at L.A.’s City Hall and honored the victims of the shooting in which a man armed with a semi-automatic rifle and a homophobic agenda took the lives of 49 innocent people. I created the flag specifically for this vigil in order to offer a communal space for queers and allies to share their thoughts, their anger, their hopes, and their grief. The names of the victims that were released at the time the vigil took place are recorded on the flag. I also invited those present at the vigil to share their thoughts and reactions to the shooting as well as messages for the queer community by writing on the flag.

Today it is nearly covered in messages from queers and allies of all walks of life: all ages, orientations, classes, identities, occupations, races, and statuses. It is a symphony of voices pushing back against an attempt to silence us. It is a reminder to me and I hope will be a reminder for generations to come of the strength and incredible endurance that exists in queer community.

Having decided to donate this flag to the One Archives, I felt strongly that it was important to first share it with others who could not be present at the vigil as well as those who were feeling too unsafe or filled with grief to outwardly respond to the Orlando tragedy.

What resulted from this urge was the performance Violence and Visibility in which I became a walking, breathing version of the vigil flag. I decided to use my body as a messenger board and invited those present the night of the performance to share messages to the queer community in ink on my skin. I decided to leave the messages present until they vanished naturally, a statement against the victim blaming inherent in the notion that “visibility makes you a target” and the attempted erasure or silencing of LGBTQAI* pride by way of violence. The messages imprinted on my skin were enormously powerful and I felt honored to carry them for the full week during which they were visible. Among others, they read:

“We are stronger together.”
“Undefeated.”
“Embrace.”
“Rest in power.”
“I’m sorry. I love you. You deserve better.”
“You are not invisible.”

I dedicate this flag to the One Archives in the hopes that this flag and the deep roots, the diversity, the love that it represents that is the foundation of our queer community lives on for those who need to be reminded of how very strong indeed we are together.

With Gratitude To: The Ones Archive, Baha H. Danesh, Tiger Munson, the Montalban Theatre, Ale Caro, Rene Abalos, Zero Prefect, Tanya Leigh Armstrong, Adja Alvarez, Chi Barnett, Gwendolyn Newton, Crys Bowie, Annie Rush, The Sisters of Perpetual Indulgence, and all who participated in the performance as well as the signing and march surrounding city hall of the flag.

[All photos by Gwendolyn Newton except far right by Zero Prefect] 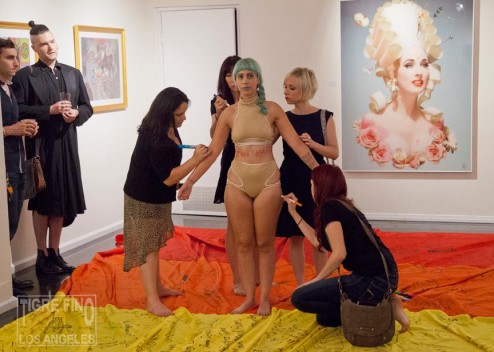 [Photos by We Choose Art]

The following are snapshots I took of the comments my fellow queers wrote on my body. The text is also included on my Instagram: https://www.instagram.com/queerseawitch/

[Photos from: https://www.instagram.com/queerseawitch/]
Statement Following the Performance:
Some people would say by doing this I am making myself a target for violence. I have realized in the past weeks that in many ways as a queer woman I am always a target for violence. I do not have a choice about that. People tell me: be safe. But my safety is not up to me. The safety of my queer friends is not up to them. The safety of my friends of color is not up to them. I wish it were.

If you are an ally and want to show your support for queers in your community, do it with more than your words. Vote on laws that will protect us. Donate to queer organizations. Step up to help when you see queers in need of the basic things we need to live: housing, jobs, healthcare, anything and everything that can contribute to our safety. Hire queers in your work spaces and schools. Keep us visible by keeping us alive.

More about the flag and the flag signing can be found on my Patreon: https://www.patreon.com/posts/flag-for-orlando-5819511

Thank you to Tiger Munson and Baha H. Danesh for curating Rainbow SHIFT 2.0, to all the artists of Rainbow SHIFT 2.0, The Montalban, to POUTFITS for the (p)outfit,and everyone who participated. Your words are beautiful and I’m honored to carry them. Thank you to Gwynedd Stuart LA Weekly for documenting this project.

To My Fellow Queers:
Our community is strong. We care about each other. We support each other. We are not going anywhere. I and so many others love you. “May our love be known by our refusal to disappear.”