Undone By Each Other

Undone By Each Other is an endurance performance exploring the transformative power of grief that is the loss and gradual reconstruction of the self during the grieving process, and the shared vulnerability of private mourning rendered public. This performance took place at the East Jesus compound in Slab City as part of the Morton Salt Children’s Religious Revival hosted by Myriad Slits.

“Let’s face it. We’re undone by each other. And if we’re not, we’re missing something.” -Judith Butler, The Powers of Mourning and Violence 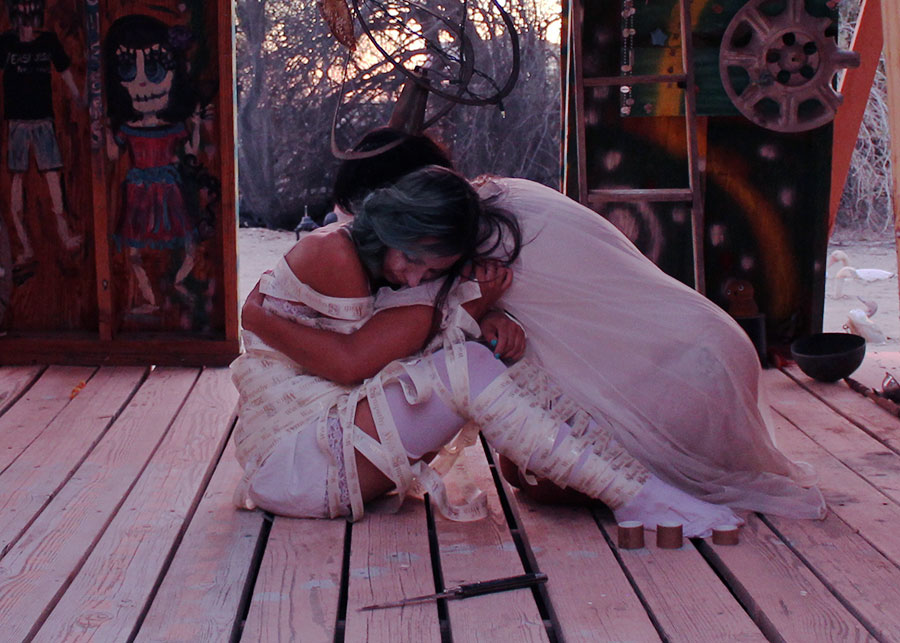 There are twelve chairs, small ones— the kind you see in preschools, made for tiny legs and tiny derrières. They are laid out in two rows theater-style, just in front of the razor-sharp limbs of the ironwood tree, just between a paddling of plastic ducks floating inanimate and immortal in a dry dirt lake. Over the wooden spires of the Tower of Barbarella—a two-story fortress embellished in baby doll parts, animal bones, toy guns, Christmas lights, and N02 cartridges—the sun is beginning its slow melt into the wash.

I take the ribbons in my hands—three spools of ivory ribbon that say    With Sympathy    over and over again embroidered in gold thread with serif flourishes. I sling them out so they hang limply over the ring of razor wire that drops from the ceiling like a skeletal worm and carry each end to a different corner so they shoot down like party streamers. In the SE and NW corners, two totem creatures—a snowy white bird who is also a man and a lace-hooded ram made up of two women balanced one atop the other, sit in observance. On the floor at the entrance of the tower, I place an open switchblade. The watchers are beginning to arrive and seat themselves in the small chairs or stand or squat before the tower as I lay on the dusty wooden slats on the tower floor, hugging my knees to my chest. I begin to cry.

The goal is to weep openly and honestly for as long as possible, to thwart the urge that is nurtured by society to sequester grief, to take my own private grief and perform it to and with others, to understand how grief is a performative act and therefor inherently transformative, to transform myself and others, to change my grief into something beyond grief, to create something new in the chasm left by the thing that is no longer. 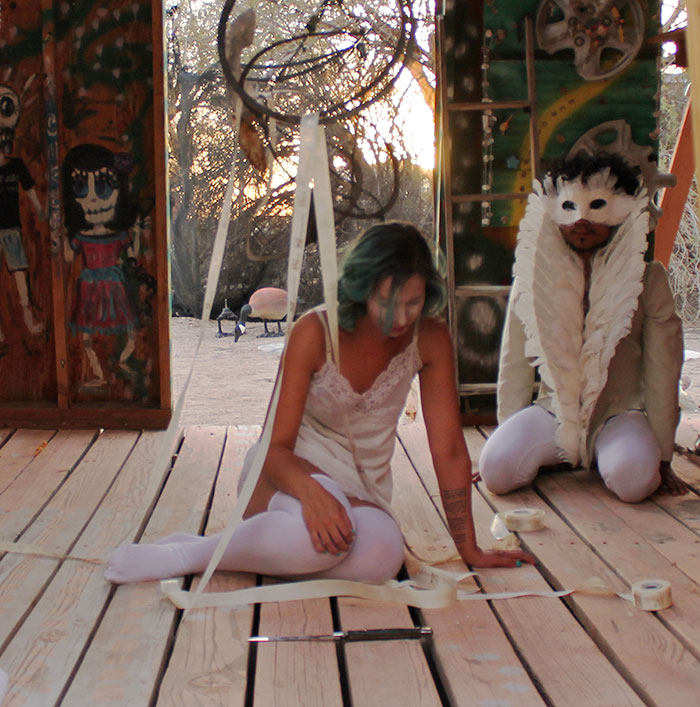 Every thirty seconds the camera clicks as I continue to weep, at times hard and fast—a raw anguish ripping from my chest with violence and at others only a swallowed whimper. The watchers are silent at first, waiting expectantly. Before us, the sky light shifts through a spectrum of bleached golds to burning oranges as a flock of gulls carrying the scent of the Salton Sea on their wings bolts overhead.

The bird who is also a man approaches and with long arms swathed in white leathers wraps a length of ribbon around my body. He presses my head to his chest, cradles it between two rows of feathers which come down to a V just below his pelvis—a trench which catches and deflects my tears. After being like this together for a moment, he kisses me gently on the back of the head and is gone. 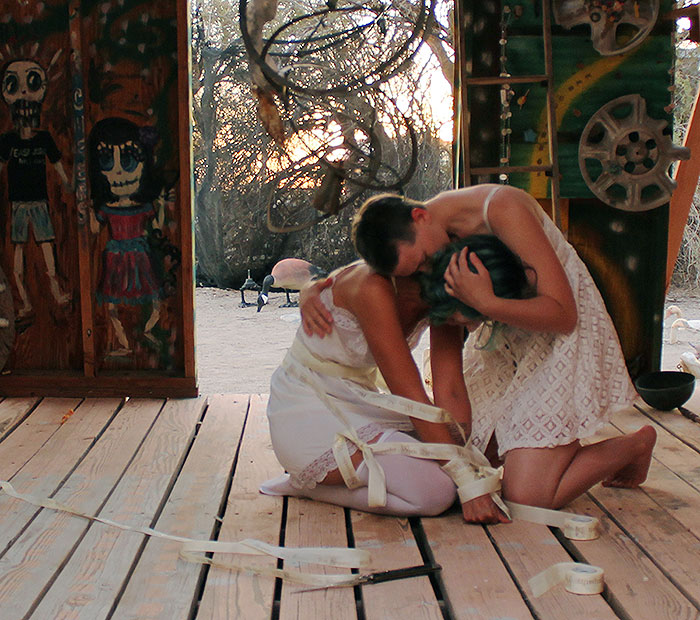 A girl comes and quietly wraps her thin arms around me. I feel the prickling of her short hair against my cheek as she presses her body to mine. I am shaking with tears—shaking against her, our bodies rocking back and forth. Tears fall from her chin to form a shallow pond in the trench of my clavicle. “You’re going to be okay,” she tells me, then plants her lips against the nape of my neck and vanishes.

In the stillness, I can hear unseen others weeping softly. I bury my head into my legs, pressing the cold of my knee caps against my sockets, pushing my eyes deep inside my skull. 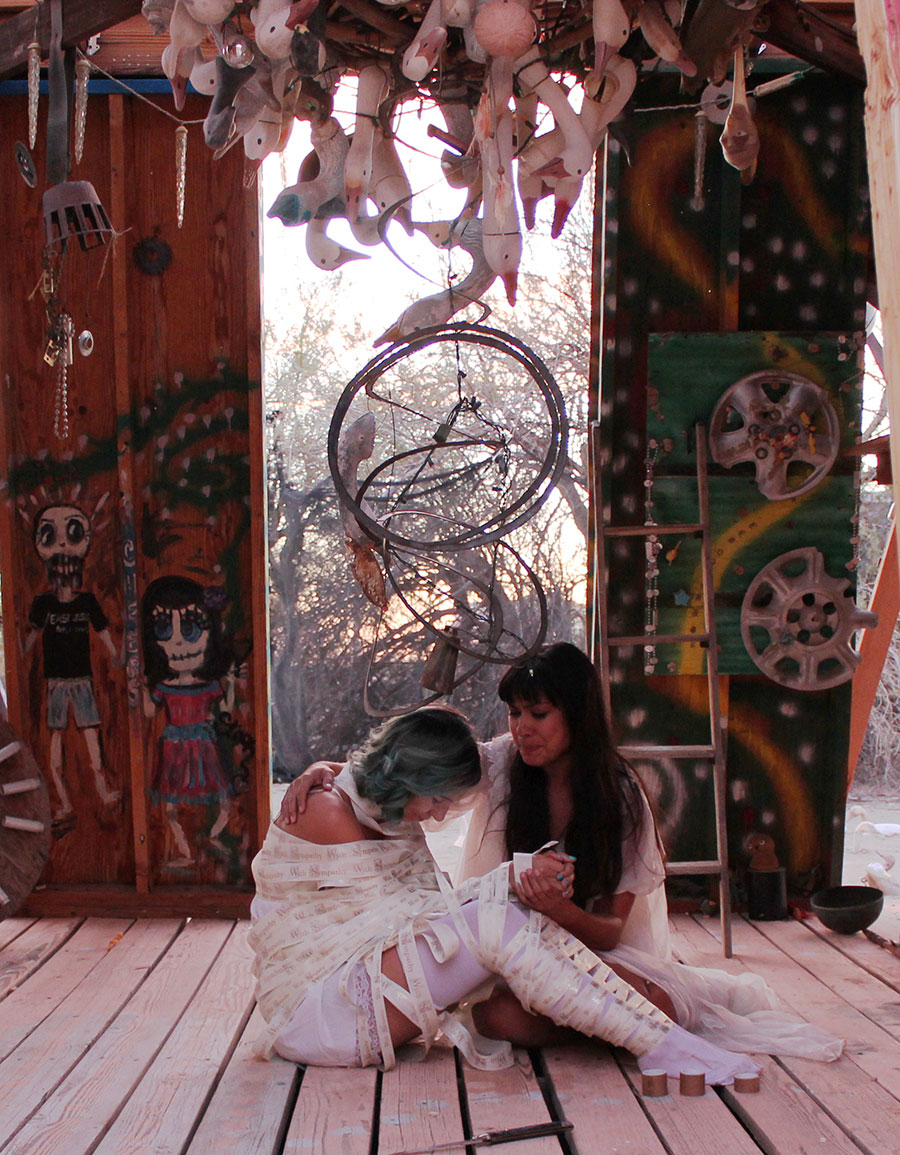 I don’t see her approach. I know she is there only by touch and sound: her voice comforting me like a child, her tears falling against my shoulders, the treble and pressure of us weeping in tandem. She tilts my head back and her dark eyes peer into mine offering a probing empathy that if voiced might sound like, “What is this that we are doing?” and at the same time, “Never mind. I understand. I am with you.” 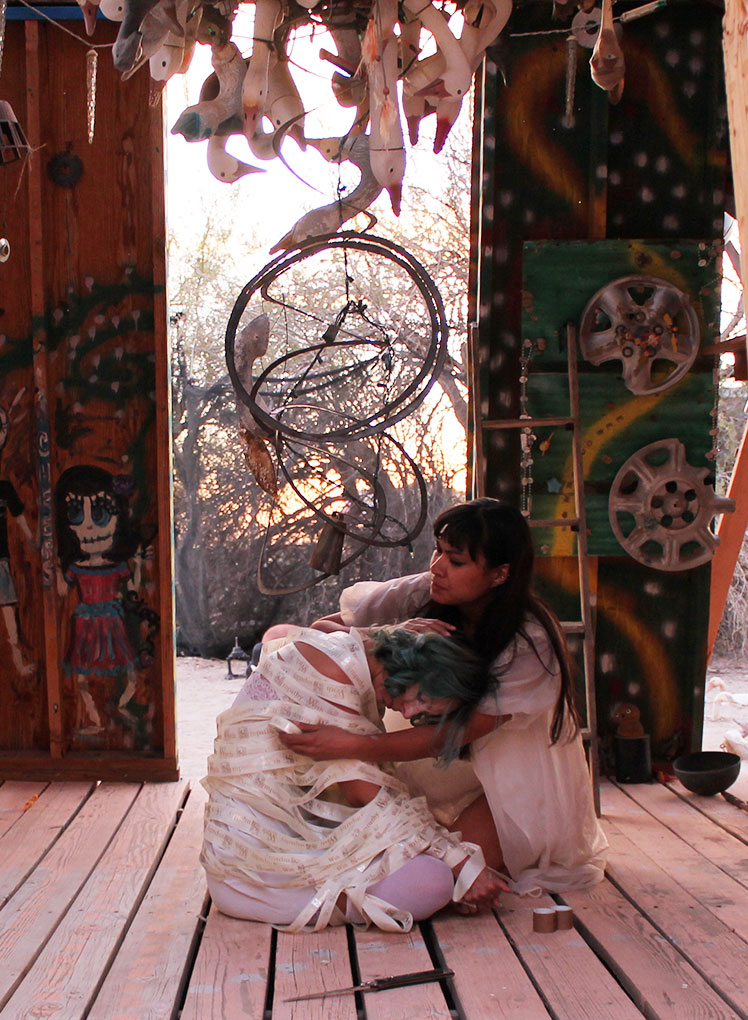 She wraps me in the ribbons, binding me carefully. She wraps my wrists together and arms—binding them in a figure eight, making an infinity of With Sympathy. We continue like this at times laughing and then crying again. The wrapping comes faster and tighter the harder the tears come. She binds my chest to my knees, wraps the ribbons around my torso, down my spine. Finally my ankles are clasped together in the satin restraints. She takes my hands in hers and she kisses them. She smiles then like a specter—her gown a floating train of white gauze—vanishes into the golden gaze of the sun.

I can hear the rhythm of others weeping with me, animalistic, reluctant murmurs that mingle with the vibrations coming from my own body to produce a chorus of emotion rendered sonic.

I think of you. The bruise left by the brutal force of separation. The shock of a wholeness splintered. The void of abandonment: the wound left by a limb that tears itself loose from the body it is beholden to. The sudden feeling of being much less than I was. Grief as I mourn the death of us and am overcome with birthing pains for the I who is separate from you. The I I do and do not want. The I I must now be, regardless.

I think of them. The survivors. The stories I hear every week as a crisis counselor—stories of sorrow that are (I am certain) some of the most horrid truths ever divulged by human mouths. Stories of violation and betrayal. Of needless suffering. When I have the honor of hearing these stories, I have to stop myself short at empathy. I can’t emote. I have to be present to the person who has been courageous enough to share their most regretful truths with me. They need me (at the very least) to be present. I must not show that their story has affected me, even if it does. Even if every time it does.

But three hours outside LA, in a city that isn’t a city, above a lake that isn’t a lake, my face crushed against the soft powdery dust of the desert floor, I allow myself to weep. I weep for the woman whose children watch as her husband presses her face against a lit stove. I weep for the teenager whose mother refuses to acknowledge the abuse her new husband unleashes upon her daughter every morning before school. I weep for the woman and child who flee from state to state, shelter to shelter, rendered homeless by the persistent pursuit of her ex. I weep for the handicapped woman who is tricked into sharing her body with an able-bodied stranger, who threatens to share the photos should she tell. I weep for the girl who blames herself for having had too much to drink at the party, for trusting the person she thought was her friend to take care of her, who never thought he’d violate her with the help of another man. I weep for the woman in uniform who feels too ashamed to press charges because she should have known better, who is sick to her stomach because her insides feel destroyed. I weep for them and all the others. For the first time, I truly allow myself to weep. 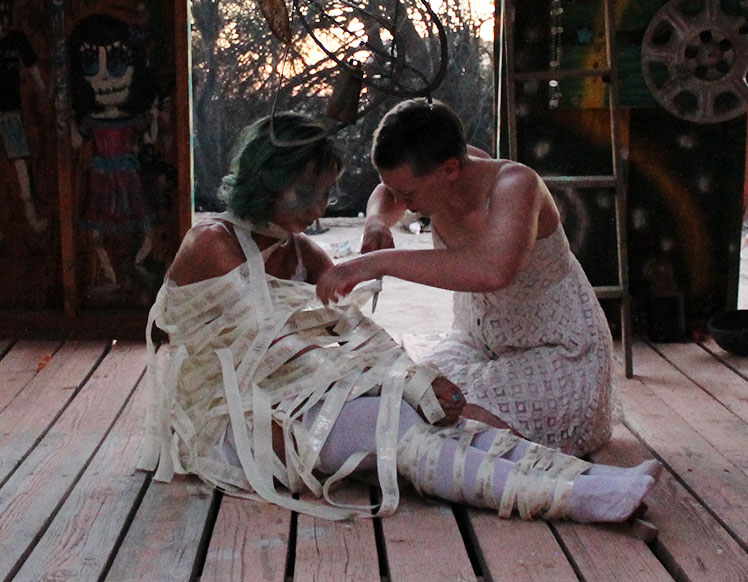 I feel her hands on my shoulders. Rearing back, my eyes pour into hers—two glass spheres overflowing. Once again, she pulls me to her chest and with determination tells me, “I am going to get you out of here.” She snatches the switchblade from the floor and inserts it into the weave of ribbons binding my arms. With a forceful movement upward, she slices and breaks them open. She is weeping hard now, weeping and cutting the ribbons away faster and faster. I can see something working inside of her just as it is working inside of me, something beginning to tear loose the more she cuts, the faster and harder she works at the restraints.

There is nothing left now but the shreds of ribbons that lay all around me like shards of shell left by a newly hatched creature. Our hands find each other and we speak into each others’ eyes- eyes heavy with grief and joy. Our bodies are vibrant with an awareness of the empathy we share, the empathy that is our own unique resonance dancing alongside the fluctuating heartbeats and consciousnesses of others. Hand in hand, we come to our feet and stare back at the faces watching us, exploring the contents of their faces—some shocked, some flushed with sorrow, some empty as if waiting for some emotion that has escaped them, some strained with a pressing fullness. 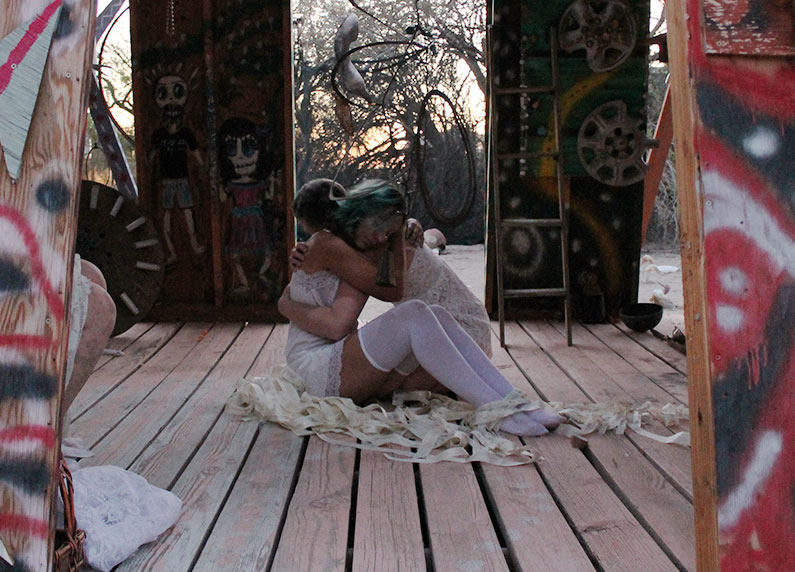 We carry the remaining shreds of ribbon from person to person, stopping before each to embrace them and look deep into their eyes while binding their hands together. In the binding there builds an unsaid strength. Put into words it might read: You are not alone in your suffering. You are never alone in your suffering. We are forever binding. We are forever bound to each other. We are never alone. At last, our hands are empty. They find each other. My eyes smile into her eyes which smile back at me. She laughs and I laugh. And laughing through our tears which are no longer tears of burden but tears of release, we run to catch the remaining strip of sun as it slithers into the smoldering wash.

*I have changed the details of the survivor stories here mentioned to protect the confidentiality of the real survivors in question. If you feel at a loss by the stories here divulged and moved to help, please consider making a donation to or volunteering with your state or local (link goes to CA list) rape crisis center.